Reviews of THE PRESENT

If you are looking for music that communicates instantly with the soul, you must listen to Torben Thøger’s
album The Present. Thøger is Danish, and the album is now for the first time released in the U.S.A.,
United Kingdom, Ireland, Germany, Switzerland and Austria. If you are a Secret Garden-fan, you will
feel at home after 5 seconds of listening. Experts, such as Suzanne Doucet of Only New Age Music,
say his music has more in common with the rich eclecticism of top European New Age artists than it
does with the more traditional and staid sound of Denmark’s current New Age offerings. She offers,
“His music is influenced by different cultures and styles, and he blends classical, world and pop elements
into tapestry of colorful and relaxing soundscapes; his music will appeal to many different audiences.
I would call his music Holistic New Age.” Thøger has also released another fine album called Harmony
and AKASHA. His music can be bought on CDBaby and I think that The Present is 8 tracks of pure bliss.

Suzanne Doucet of Only New Age Music in Hollywood says about The Present:

Romantic and soothing "The Present" is a treat for the soul!
Torben is a very talented composer, arranger and performer!
His music is rich with various textures, instrumentation and
many unexpected chord progressions ... Highly recommended! 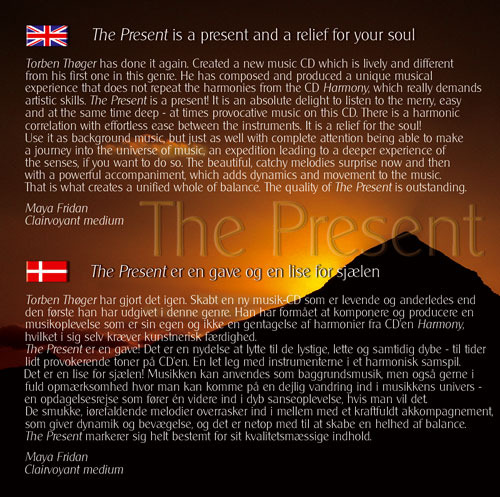