Click here to go to Our Own Store to BUY!

Learn how to get your music noticed at ReverbNation.com 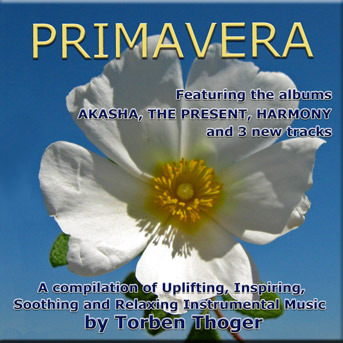 Three illuminating new pieces from Torben Thoger’s upcoming album, LUZ, enlighten
twelve works from AKASHA, THE PRESENT and HARMONY in new compilation.
Los Angeles, CA (September 9, 2009) – Torben Thoger is seeing the light. After successfully introducing three popular New Age albums to the U.S. market in just two years -- AKASHA, THE PRESENT, HARMONY -- this Danish expatriate in Spain is releasing PRIMAVERA just in time for holiday gift-giving. This, his only compilation, is special in that it contains three tracks from his forthcoming album, LUZ, which means “light.”

The compilation delivers a generous 15 tracks, specially selected and sequenced for beauty and relaxation. It is named after a track that was immensely popular both here and in Europe called “Primavera,” off the album THE PRESENT. Also included is AKASHA’s “A Wonderful Place,” which spent three months in the atop the New Age Radio charts and reached number one on cable’s Music Choice Soundscapes. Sirius Satellite Radio’s Top 40 New Age Singles and Artists charts also embraced both the AKASHA album and Thoger for several months. In 2008, he was nominated for “Best New Artist” by New Age Reporter and AKASHA was nominated for “Best Neo-Classical Album.” Thoger still has 3 tracks holding the number 1, 2 and 3 slots on “SongVault Directory for New Age Music.”

Exciting news for holiday retail is that Thoger is including a few tracks from his next album due in 2010, which he has been working on since moving to Alicante, Spain. In hearing the joyful melodies of these pieces, one imagines that the move has been a very positive one for Thoger.

“The new melodies came to me with absolute ease; I liked the simplicity and kept the piano as the leading instrument. Many suffer from crisis and need to seek inward for strength. My music supports positive emotions, and I hope it will make a difference,” Torben Thoger says.

The music on the albums and tracks is composed, arranged and produced by Thoger, and he performs and programs most of the instruments and effects himself. He collaborates with international artists like Pepe Bornay, who adds spice with Spanish guitar, rhythm guitar and Latin American instruments on the albums THE PRESENT and AKASHA. Cuban musician Armando García Fernández plays the haunting solo violin parts on those albums as well.

If you enjoy music by Steve and David Gordon, David Arkenstone, Chris Spheeris or Michael Hoppe, then you will want to give a listen to Thoger’s music.

Regarding the previously-release albums, Thoger reminds us, “HARMONY has the subtitle ‘A sensitive and dynamic journey of beauty and joy,’ and THE PRESENT ‘Timeless instrumental music for your well being today.’ AKASHA is inspired by the Akashic Record, which contains the most important and vital information about our soul’s purpose and journeys in the past, in this lifetime, and it can provide a guide for the future.”

Torben’s style is influenced by different cultures and styles, and he blends classical, world and pop elements into a tapestry of colorful, relaxing and soothing soundscapes,” she says. “His music appeals to many different audiences. Torben has a natural and intuitive talent to create music that is relaxing and healing, but also compelling and interesting to listen to. His compilation, PRIMAVERA, includes the essence from his previous work and the album to come.”

PRIMAVERA and Torben Thoger's other albums and tracks are available in both CD and in downloadable mp3 format. Buy his music in stores or online at Amazon.com, CDBaby.com, NewAgeMusic.com, iTunes.com, Rhapsody.com, emusic.com, and at other worldwide online stores and download sites.

Torben Thoger has studio facilities in Guadalest
in the mountains west of Altea in the province of Alicante.
He is the proprietor of “Torben Thoger Productions”,
which creates and produces music and film.
Torben is a member of “KODA”, “NCB” and
"DJBFA - The Danish Society for Songwriters and Composers." 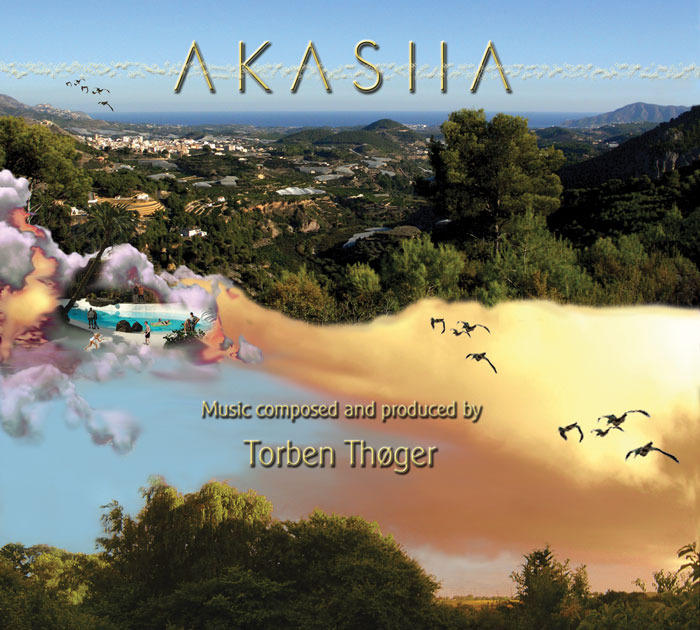 CD / Album. Released in Europe, USA, India and Brazil
An exciting release. Torben Thoger’s latest album AKASHA delivers the many sounds of love – passionate, joyous, wistful, gentle – from his studios in Denmark and Spain straight into every listener’s heart. In 2007 and 2008 it was released in the United States, the United Kingdom, Ireland, Germany, Austria, Switzerland, Scandinavia, India and Brazil. “Torben’s style is influenced by different cultures and styles and he blends classical, world and pop elements into a tapestry of colorful, relaxing and soothing soundscapes. His music will appeal to many different audiences,” says Suzanne Doucet of Only New Age Music.

The album is composed and produced in both Denmark and Spain and the participating musicians and choir members come from all over the world. It is international music for a comprehensive audience, as Torben succeeds in mixing genres into a unique musical experience. Torben Thoger’s albums AKASHA, THE PRESENT, HARMONY and PRIMAVERA are available in music stores, online from Amazon for instance and for download from iTunes and others.
Torben's own CD Store 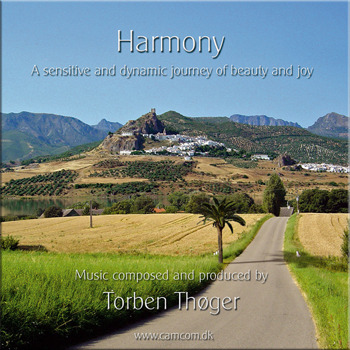 HARMONY - A sensitive journey of beauty and joy

CD / Album. Available in the United States, the United Kingdom, Ireland,
Germany, Austria, Switzerland, Scandinavia, Brazil and India
Harmony offers a sensitive, dynamic and joyful journey into a world that is rich in fantasy and beauty. Torben Thoger has found a balance where classical, world and healing music meet. The music on this CD aims, among other things, to create a calming and balancing effect, which will strengthen one's ability to undo an excess of stress, and re-establish a natural flow of creative energy.
Torben's own CD Store 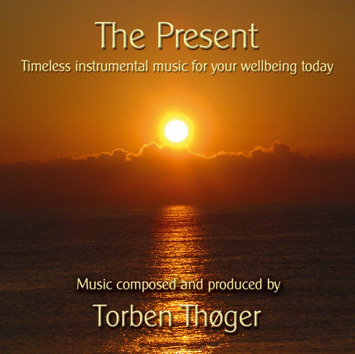 THE PRESENT - Timeless instrumental music for your wellbeing today

This beautiful and catchy instrumental music is both relaxing and uplifting, with meaningful undertones. Listen and make a journey into the universe of music, an expedition leading to a deeper experience of the senses. 'The Present' is relief for the soul! All instruments and effects are performed and programmed by Torben Thoger, except guitars on tracks 1, 3 and 5 which are played by Pepe Bornay, and the solo violin on tracks 1 and 3 which is played by Armando Garcia Fernandez. The album was recorded and mixed in Samso, Denmark and Alicante, Spain, and is the successor to the best selling album 'Harmony'.
Torben's own CD Store 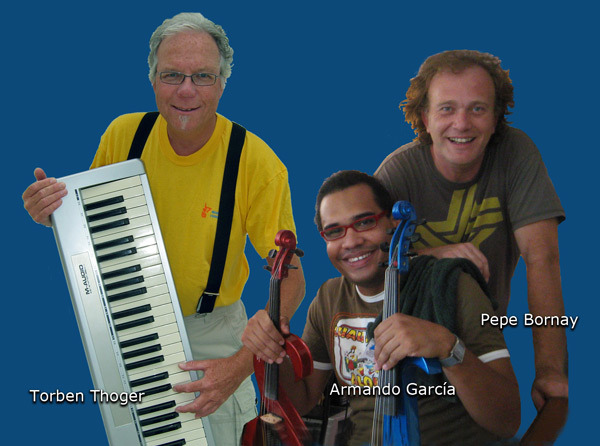 Other musicians and singers.

Click here to go to Torben's Own Store to BUY! 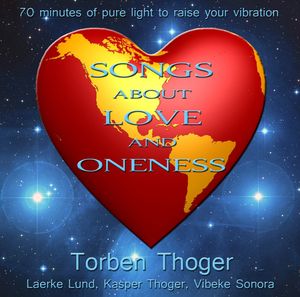 The new album "Songs about Love and Oneness" from Torben Thoger with 18
new songs is especially created to enlighten and raise your energy vibration.
To know more Click here or the album cover above.

Click here to go to Torben's Own Store to BUY!

Psychic Visions Lead to the Passionate Soundscapes of Torben Thoger

How New Age music composer Torben Thoger’s belief in psychic guidance illuminated his musical path to success and happiness. His new album of “heart” music, AKASHA, is inspired by the ancient wisdom of the Akashic Records.

Los Angeles, CA (PR WEB) March 2008 -- He sits at the table with eyes closed, elbows propped up, meditating while dangling a crystal on the end of a string. The swinging slows, and the crystal rests on a map of Spain that is spread across the desk. Opening his eyes, Danish composer Torben Thoger sees the region of “Alicante” under the crystal, and another step is taken in his adventurous journey of musical discovery that led to this month’s U.S. release of his new album, AKASHA.
As he reached for his computer keyboard, Torben didn’t know who he might find in Alicante, Spain, but he had faith in what two trusted mediums had predicted in earlier sessions with him. A successful film/TV music composer and owner of Denmark-based Camelot Communication, Torben Thoger is as open about his spiritual life as he is dedicated to his music. He explains how the clairvoyants helped to identify the talented musicians who would join him in bringing his most recent projects -- the inspired albums titled The Present and AKASHA -- to life.

“I found it intriguing that in both 2003 and 2004, two seers had said to me ‘There is a charming, artful, man-about-town in Spain who will be a great help to you with your music,’” Torben shares. “Two unrelated mediums offering the same description was a powerful message, so I was encouraged to keep it in mind on my travels to Spain, but met no one with whom I really resonated. Finally, at home in Denmark and eager to move forward with my recording, I took out a map of Spain and a crystal on a string to find some further direction.”

Following the crystal meditation, a search on the Internet for “music studios” near Alicante, revealed a studio number for a musician named Pepe Bornay. Upon connecting by phone, Torben says he felt an immediate rapport with Pepe as if they’d known one another for years. A subsequent visit to the region confirmed that the two were very musically compatible, and that Pepe was indeed a charming, artful man-about-town; Torben felt confident that Pepe was the person that both psychics had envisioned.

Having already completed Harmony, Torben wanted a new sound for The Present, and he found it with Pepe and his fellow musicians in Spain. Torben describes his approach to musical composition as “highly intuitive,” often beginning with melodies and intentionally following his heart to expand their sound. He says it is no coincidence that he receives comment after comment about how his music soothes and heals the listener’s heart chakra. AKASHA, in particular, is focused on the heart; in listening, one can imagine each song telling part of a story about soul mates finding love, losing it, and reuniting in joy and oneness.
Torben Thoger loves the process of composing music, favoring catchy melodies and an eclectic mix of genres and influences. For his albums, he plays grand piano and many other instruments via keyboard using highest-quality sample sounds from original acoustic instruments. Combining his composition with the visceral energy of international artists Pepe (Spanish guitar, rhythm guitar and Latin American instruments) and Armando García Fernández (solo violin) adds an exotic element to the albums The Present and AKASHA. AKASHA also includes the entrancing “IAO” chant, sung by the Dutch choir from the stagegroup Teatro del Sol from La Nucia, Alicante, Spain, as directed by Rob Barendsma.

The ensuing years of trips back and forth between Spain and his family’s home in Torup (on the Danish isle of Samso) led to more than a few new recordings; with Pepe’s help, Torben found in Alicante the land he’d always envisioned, a place he’d like to live for the rest of his life. Torben purchased the land, and will break ground on building a state-of-the-art sustainable home there later this year. Ever playful, Torben toyed with combining images of his beloved local Danish and Spanish landscapes in the cover art for AKASHA.

Clearly, Torben Thoger loves to share the positive effect that psychic vision has had on his life, and his album AKASHA delivers a tribute to that idea. He explains “The Akashic Record contains the most important and vital information about our soul’s purpose and journeys in the past, in this lifetime, and it can provide a guide for the future…this CD comes from my heart…and AKASHA.”